Drought Resets for Archuleta County – What is drought & how is it determined? 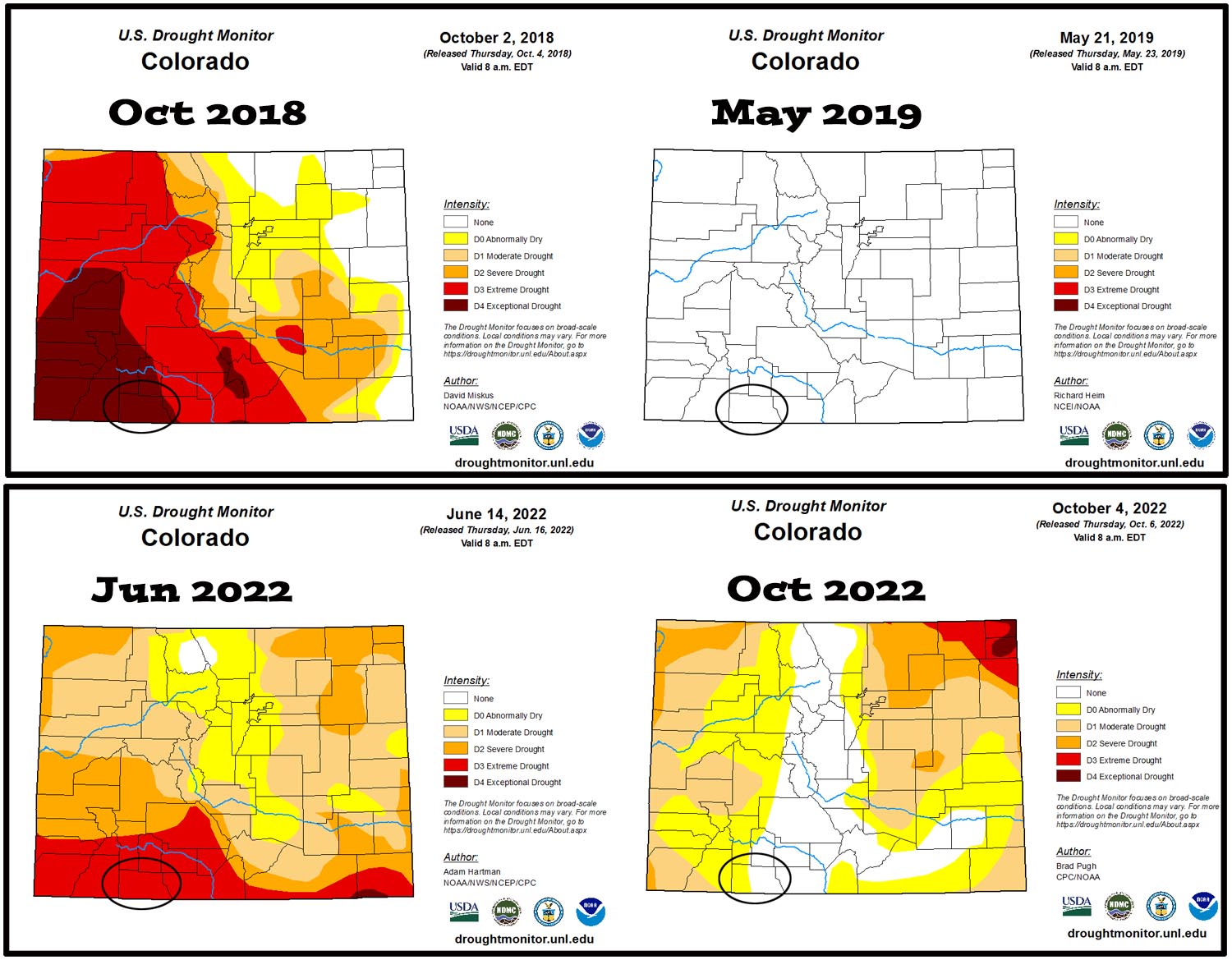 We’ve recently had two drought “resets”: winter 2018/2019 and summer 2022. What did it take to significantly improve our drought conditions?

Drought.gov: In the early 1980s researchers found more than 150 published definitions of drought, reflecting differences in regions, needs, and approaches.

Drought is generally defined as “a deficiency of precipitation over an extended period of time (usually a season or more), resulting in a water shortage.”

Merriam-Webster Dictionary: “A period of dryness especially when prolonged.”

NOAA’s National Weather Service: “A deficiency of moisture that results in adverse impacts on people, animals, or vegetation over a sizeable area.”

Wikipedia: A drought is defined as drier than normal conditions.  This means that a drought is “a moisture deficit relative to the average water availability at a given location and season”. A drought can last for days, months or years. Drought often exerts substantial impacts on the ecosystems and agriculture of affected regions, and causes harm to the local economy.

A small example of the many indices:

Drought isn’t defined or determined by what’s going on in your backyard.  Lots of data is incorporated across large regions and entire drainages. Drought is slow to develop and slow to resolve.

The five different types of drought – meteorological, hydrological, agricultural, socioeconomic, and ecological – have different impacts, may or may not overlap, are determined and measured differently, and often have varying durations.

Be thankful for these drought resets!  Why do I call them resets?  The vast majority of data indicates that we will continue to struggle with drought.  Lake levels throughout the region, and the two primary lakes – Powell and Mead – need multiple years in a row of above average precip to make a real difference.  Unfortunately, the data says the odds are against it.

I’ve been a “weather geek” since I was young child. I joined the military out of high school and was lucky to get my dream job in weather. I have 20 years of military weather experience which includes forecasting the weather all over the world. Highlights were six years in Alaska and making life and death weather decisions during deployments. I love mountains, I love snow, and I love summertime thunderstorms. I spend a bunch of time playing outdoors and found my paradise in Pagosa Springs. I do Pagosa Weather as a community service. Hopefully you find us helpful!
PrevPreviousThis could be a really entertaining weekend!
NextFasten your seatbelts!Next