More snow is on the way… 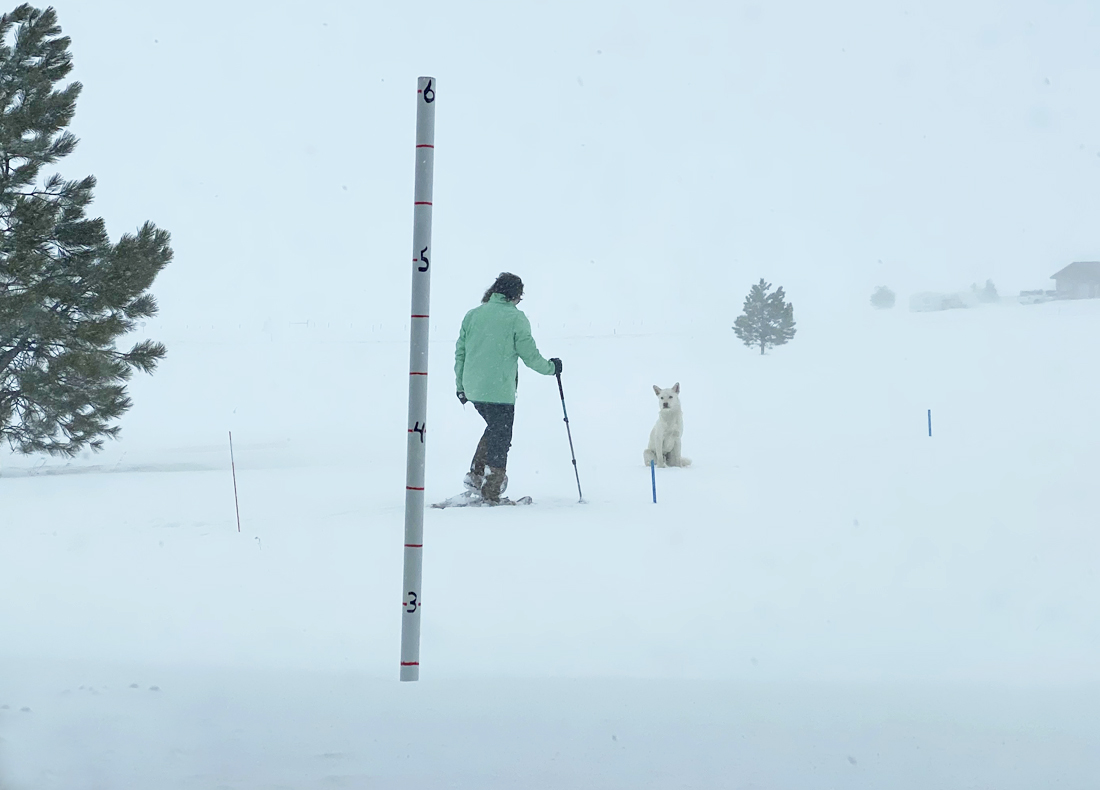 At Stevens Field the high temp yesterday afternoon was 39 and the low this morning was 28.  The peak wind at the airfield in the last 24 hours was 43mph and it occurred around 10pm last night.  Winds most of the night were gusting into the 20-35mph range.  The Wolf Creek summit peak wind was 52mph at 9:15pm and it stopped reporting shortly after.

Precip in the last 24 hours to around 9am…  Most reports were in the 1-3” range but there were a couple of overachievers in the 4-6” range. Wolf Creek reported 9” this morning.

The first wave is still moving through.  It doesn’t look impressive on satellite, but Mother Nature’s snow machine is turned on.  Cyclonic flow, upslope southwest flow, moisture, and probably the most helpful ingredient right now, cold air advection, are keeping the snow going, especially in the mountains.

The next wave, which will be stronger, will move across our area tonight through tomorrow night.  The upper level trough will finally move through Thursday morning.

This afternoon… Mostly light snow will fall on and off in the valley.  Heavy snow will continue to fall in the mountains.  Highs will be in the upper 20s to mid-30s.  In the wind prone areas, winds will peak in the 20-25mph and taper off in the evening.  Those of you not getting the winds, consider yourselves lucky!

*** There is still a Winter Weather Advisory valid until 5pm today for the upper San Juan Basin, which includes Pagosa Springs. 1-3” of additional snow is expected. ***

This evening into Thursday afternoon… Expect periods of heavy snow, blowing snow, poor visibility, and bad driving conditions through Wednesday night. The bulk of the snow will be done by early Thursday morning, though scattered showers will persist through the day, especially over the mountains.

Winds… Winds will pick up again after midnight and gust 25-35mph causing periods of significant drifting snow, especially Wednesday afternoon. Winds up at Wolf Creek will consistently gust into the 45-55mph range into Wednesday evening.

Drifting snow… In wind prone areas, I expect 3-5 foot high drifts, and roads will fill shortly after the plow goes through.

My snowfall forecast to Thursday at noon…

*** The Pueblo NWS has issued a Winter Weather Warning for the Eastern San Juan Mountains above 10,000ft valid from until 11am Thursday.  It’s for 1-3 feet of snow and winds up to 50mph. ***

*** The Grand Junction NWS has issued a Winter Weather Warning for the Southwest San Juan Mountains valid until 11am Thursday for 3-4 feet total snowfall over favored terrain, and winds to 45mph. ***

*** The Grand Junction NWS has issued a Winter Weather Warning for the upper San Juan Basin which includes Pagosa Springs.  It’s valid from 5pm this afternoon to 5am Thursday.  5-10” of additional snow is expected with higher amounts in the San Juan foothills (which is us). ***

*** The Colorado Avalanche Information Center has issued an Avalanche Watch.  Very dangerous avalanche conditions are expected to develop later today and possibly last into Thursday. Make sure to check their web page or app for the latest conditions. ***

Thursday night through Saturday… Clouds will gradually clear Thursday night leading to a cold Friday morning.  For the rest of this period skies will be partly cloudy with a few spotty snowshowers over the mountains on Saturday.

I’ll do daily posts through the storm.

I’ve been a “weather geek” since I was young child. I joined the military out of high school and was lucky to get my dream job in weather. I have 20 years of military weather experience which includes forecasting the weather all over the world. Highlights were six years in Alaska and making life and death weather decisions during deployments. I love mountains, I love snow, and I love summertime thunderstorms. I spend a bunch of time playing outdoors and found my paradise in Pagosa Springs. I do Pagosa Weather as a community service. Hopefully you find us helpful!
PrevPreviousIt’s going to be nasty…
NextA dud so far for many but it isn’t over!…Next