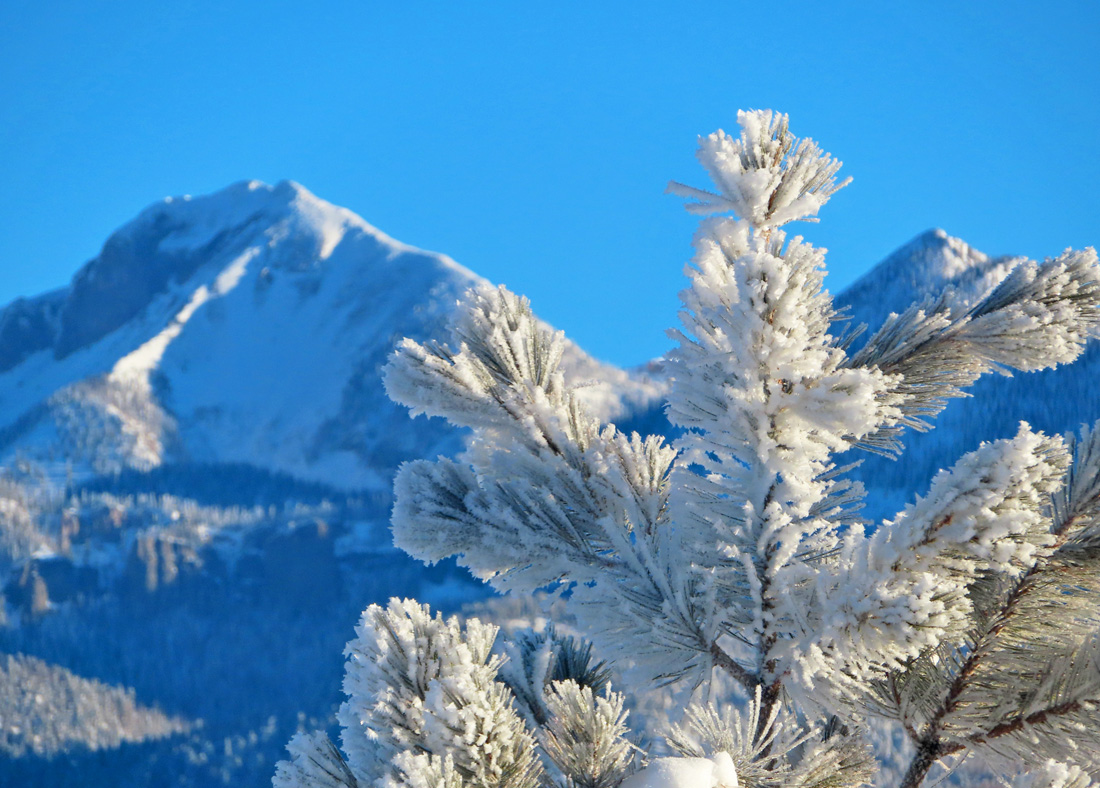 Hoar frost: “A deposit of ice crystals on objects exposed to the free air, such as grass blades, tree branches, or leaves. It is formed by direct condensation of water vapor to ice at temperatures below freezing and occurs when air is brought to its frost point by cooling.” …. Pic taken 1/3/2022

At Stevens Field the high temp in the last 24 hours was 36. The low this morning is missing. The peak wind at the airfield was 4mph.

We have zonal west-northwest flow over the region.  An atmospheric river has set up that will impact northern Colorado, but not us.

Wednesday afternoon to Thursday morning a trough will move through northern Colorado from the northwest.  Our mountains might see a few scattered snowshowers, but most of the action will stay to our north.

Saturday and Sunday a weak trough coming from the west dips a little farther south and will give us more clouds and scattered snowshowers, especially in the mountains.

I don’t see any significant systems next week, but the flow stays zonal.  These patterns are difficult to forecast because they could go either way – active or inactive.  Often something will pop up in the flow that gives us a pleasant surprise. Let’s hope for that, otherwise, it looks dry for a while.

Today through Friday…  A few more clouds and a few mountain snowshowers will move through Wednesday afternoon to Thursday morning.  A few lucky spots in the mountains along The Divide could get an inch of snow. Patchy morning fog is possible in the low lying areas, especially after a sunny day with temps above freezing in the afternoon.

Weather geek alert… A sunny day with temps above freezing melts a little bit of snow and adds moisture to the air just above the surface.  That little bit of added moisture then pools in the low-lying areas. Overnight temps cool to saturation leading to patchy fog.

Highs will be in the 30s through Thursday.  Friday will be a little warmer with highs in the upper 30s to lower 40s. Lows will be 0 to 20.

“You can trigger a dangerous avalanche on slopes steeper than around 30 degrees on northerly facing terrain at all elevations.”

Saturday and Sunday… We’ll see a few more clouds and scattered snowshowers, mostly in the mountains.  The best chance for snow will be during the day on Saturday and Saturday night. Highs will be in the mid-30s to lower 40s and lows will be 5-20.

Monday and beyond… I’m not sure about this period.  Right now I think it will be mostly dry, but it’s an in-between pattern and a surprise system is possible.

Dates and times are at the bottom. Times are UTC/zulu with the most current time on the left.  These are 14 to 15 day products that go out to 18 and 19 January.

For increased forecast certainty, I want to see the majority of the model runs indicating snow during the same time period in the top block.

The rest of the period… No models indicate anything organized so forecast confidence is low. The GFS is the most optimistic that the pattern will stay active, but I’m skeptical.

The first week of January averages are our coldest of the year.

I’ve been a “weather geek” since I was young child. I joined the military out of high school and was lucky to get my dream job in weather. I have 20 years of military weather experience which includes forecasting the weather all over the world. Highlights were six years in Alaska and making life and death weather decisions during deployments. I love mountains, I love snow, and I love summertime thunderstorms. I spend a bunch of time playing outdoors and found my paradise in Pagosa Springs. I do Pagosa Weather as a community service. Hopefully you find us helpful!
PrevPreviousPagosa Weather DECEMBER SUMMARY and January outlook
NextA few snowflakes on Saturday – next week is still a mystery…Next