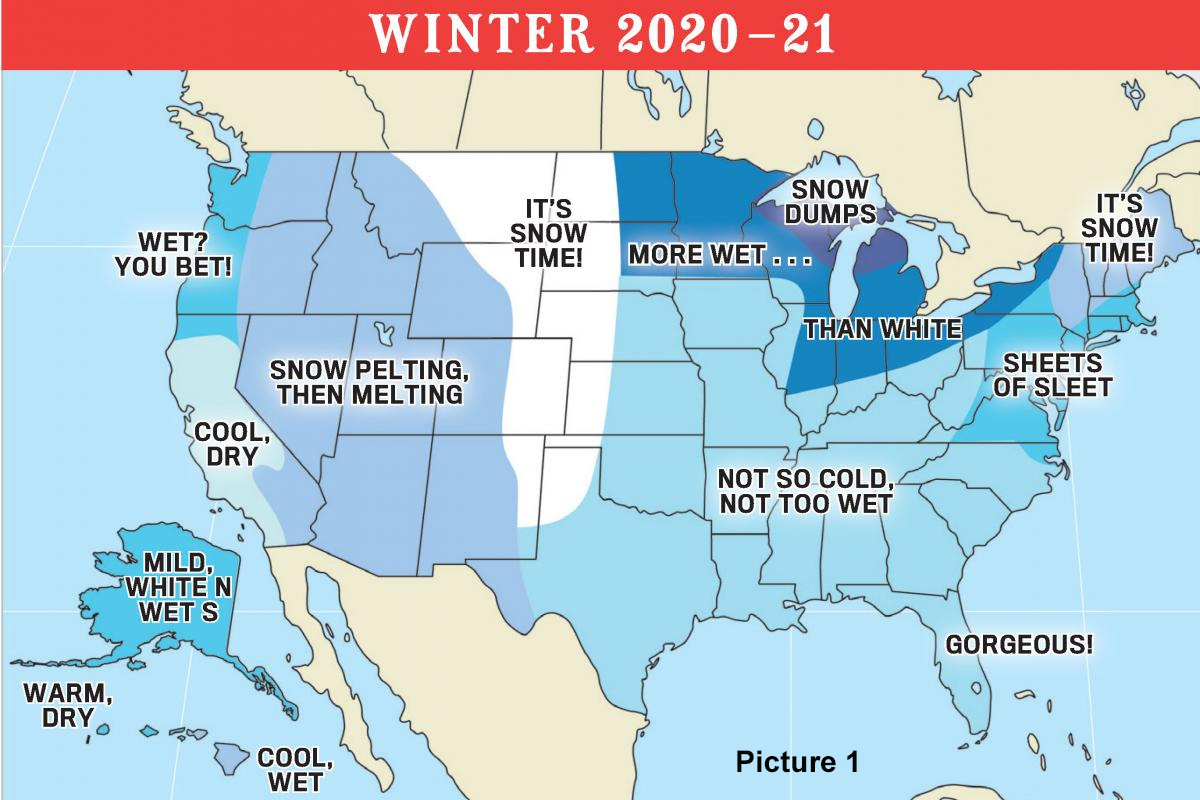 How much snow Pagosa Weather expecting this year?  Is the drought going to persist or do I need to consider getting that new snow blower this year or just book a long trip to the Bahamas?

They’re looking for Pagosa Weather to have a moist but warm winter.  However, last year Farmer’s Almanc had forecasted a “Low Temps, Deep Powder” winter.  Overall, we had less than average snowfall last year.  So how else can we predict a seasonal outlook?

Weather wants to be the same temperature and pressure everywhere!  It’s always trying to equal out.  There are air masses of constant temperature, humidity and pressure that form over large land and ocean masses around the globe and then slide around, creating weather along the way, trying to equalize.  Here in Colorado, we are impacted by the following modified air masses:  Maritime Polar (wet, cool), Continental Polar (dry, cold), Continental Tropical (dry, hot), Maritime Tropical (wet, warm).  Maritime Polar and Maritime tropical colliding with Continental Polar can have a positive influence our snow accumulations.  What are the controlling factors of these air masses?

Oceans are much slower to cool or warm than land masses.  Over oceanic areas, the way in which systems and air masses circulate is referred to as oscillation.  In the central Pacific, the primary oscillation system is the Walker Circulation.  This system assists moving pressure systems, associated fronts, and air masses along so storms give equal consideration to all parts of the country and everyone throughout the Intermountain West sees close to average snowfall totals.

This past winter 2019-2020 Pagosa Weather was under a neutral system flow and saw just below average snow fall.

After a strong El Nino event in 1997-1998, we have learned to pay more attention to the El Niño-Southern Oscillation (ENSO) cycle and we have learned how the El Nino and La Nina events can impact our winter snow accumulation. “La Niña is sometimes referred to as the cold phase of ENSO and El Niño as the warm phase of ENSO.”

If sea temperatures are too warm, an El Nino pattern results and the Pagosa area sees more than average snow.  However, that can vary wildly. Winter 2018-2019, there was just a weak El Nino and we had near record snowfall.

The main impact of either a cold or warm ENSO event is that the pattern gets STUCK.  But not whole story…

Circling the global around the equator is the Madden-Julian Oscillation.  It takes 30-60 days for this pattern of convection and drier areas to complete a circulation around the globe.  Depending on where its storm areas sit, it can influence the Walker and therefore the systems impacting us.

So, you ask, “Arleen, what about this winter?  Do I need to get a new pair of POW skis?”  Sadly, climatologists are forecasting a La Nina Winter which typically means below average snow fall for the Pagosa area and Wolf Creek ski area.

However, not all hope is lost.  Joel Gratz over at Open Snow (a web page devoted to snow forecasts for ski resorts) has pulled data from winters of 1979-2016.

During those years, there were 7 significant La Nina episodes.  During that time, 3 of the 7 winters, Wolf Creek had less than average snow (orange dot), 2 winters were average (which for Wolf Creek is 480 inches, the town of Pagosa has an average of 100), and TWO of the winters were above average (blue dot)!!!

NOAA maintains a blog about monitoring and forecasting El Niño, La Niña, and their impacts on the Climate.gov page.

If you want to learn more read these articles:

I’ll do an update later this winter. – Arleen

I grew up in Montana where my love of mountains is rooted. I was in the Air Force for 24 years; Weather Observer to Weather Forecaster to Staff Weather Officer all to ensure flight safety. Mission was to brief aircrews on clouds, winds, turbulence, icing, thunderstorms. I served a total of 8 assignments and 4 deployments around the world. After RV traveling full time for 9 years, we found paradise in Pagosa. Here we enjoy hiking, mountain biking, fishing, kayaking, snowshoeing, skiing in spectacular mountains! Plus, we're trying to solve the San Juan weather puzzle! I am an AMS member.
PrevPreviousMonsoon Outlook Summer 2020
NextContest – When will Stevens Field drop below 0F?Next